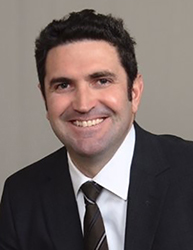 Josh is a Wealth Advisor representing Beacon Pointe Wealth Advisors in the Central Valley of California. Prior to joining Beacon Pointe, Josh was a financial advisor for the Principal Financial Group where he advised and assisted his clients in establishing sound financial plans which included both investment and insurance advice. With a background in the legal profession Josh has always been required to adhere to the fiduciary standard of placing the interests of the client above his own and the firm he represents. Josh received his Juris Doctorate (J.D.) from Thomas Jefferson School of Law and his Bachelor’s Degree from the University of Southern California. While at USC, Josh played on the baseball team and signed with the Chicago Cubs organization thereafter. Outside of work, Josh enjoys traveling, running with one or both of his dogs and spending time with his wife and son.