Beyond the Election: Peering Through the Haze

Perspective is a muscle that we have proactively chosen to exercise to the fullest degree in the year of 2020. Moments of reflection – from both the perspective of being human and being investors – are elemental sources to understanding where we have been and where we want to go. 2020 has proven yet again that Americans are strong, resilient, and adaptable people, and that while directly enduring a pandemic is a new experience in our lifetime, tense presidential elections and market volatility are not. We use perspective to impart level-headedness to evaluate the economy and remove emotions from the market in order to help our clients properly and effectively plan for the future. Below is a quick summary of several questions on the minds of many as we head down the homestretch of the presidential election, and what to watch for once the dust settles.

What effect will the upcoming election have on capital markets?

Capital markets will respond to the election as they do to any uncertain event that captures the attention of market participants. But the most important point we can leave you with is this: the election will not have much effect on the stock market in the long run, even in the most extreme scenarios. But that may not be as apparent in the current, emotionally charged environment.

Both social and general media – not only for the present-day presidential election, but also for several presidential elections prior – have amplified the rhetoric and are currently taking the narrative to the oftentimes illogical extreme in order to garner attention. To the extent that these “sources” can be ignored, thoughtful decision-making is improved. When change is expected, the democratic system of the United States is designed to foster an evolutionary process, not a revolutionary one. We live in a decentralized, federal constitutional republic based on a tradition of liberty, equality, individualism, the rule of law, capitalism and checks and balances in the application of government power. This form of government and its attendant democratic norms are not likely to swiftly disappear or be modified to an unrecognizable degree whatever the outcome of the upcoming election.

In the short run, there could be substantial volatility if the presidential race remains in doubt for more than a week or two after election day. This is merely a function of the indirect method by which the president and vice president are elected, and by the unusual circumstances of the current election – specifically the preponderance of mail-in ballots that will take time to be counted.  And it isn’t just the winner of the White House that will affect policy outcomes – control of the Senate is likely to be more impactful than the winner of the presidency.

Why? The market is trading more on economic data and prospects for further recovery than on the election outcome per se. A $2 trillion stimulus bill may be passed before the election, and it might not. What is more certain is a Democrat-controlled Senate would be associated with a much larger fiscal stimulus bill – most likely good for the economy, jobs, and the stock market in the near term even if it means larger budget deficits and debt in the future. A “blue sweep” of the White House and the Senate dramatically increases the chances of swift approval of a much larger fiscal package than currently being contemplated by the White House or the Republican-controlled Senate. The market is pricing this as the most likely scenario. It may be disappointed if a large fiscal stimulus package cannot be agreed upon before the election or if the election results dictate that further stalemate is likely. The economy – workers and businesses, landlords, and state and local governments – are likely to suffer without additional support. The size and timing of that support is the primary focus of the equity market.

It comes down to this: identifying which policies are implementable and then determining their effect on the macroeconomy and the markets is a prudent, unemotional approach – and one we are taking at Beacon Pointe. Focusing on implementable policies, and discounting campaign rhetoric, is the best way to keep our focus on the longer run.  A summary of policies, economic and market reaction by election outcome is included below.

With less than two weeks to go before the election, market reaction still depends on the effectiveness of each party’s ability to capture the narrative and drive their respective messages effectively – and on virus and vaccine developments and any wildcards we can’t possibly know today. Between now and November 3rd, capital markets will continuously discount election probabilities such that the actual event may not be much of a surprise.

And once the election is settled – most likely in mid or late November – the market will trade more on policies than on politics. Policies will determine the direction and speed of market moves. Election uncertainty will be but one factor, and difficult to abstract from everything else. But in the intermediate to long run, it is not this election that will solely determine capital market developments, but the actual performance of the U.S. economy – and that is a function of policy. 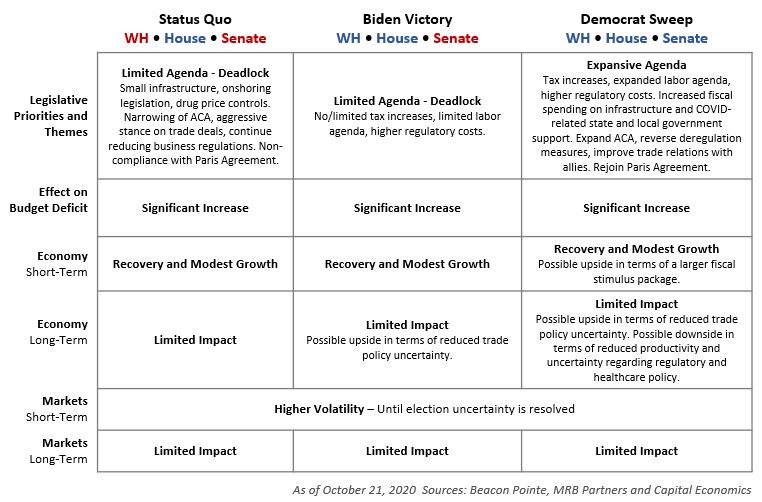 Bottom line, if there is a market dislocation in coming weeks, neither the Federal Reserve nor the federal government will be willing to undo the progress made to date in stabilizing the economy by taking their foot off the gas pedal – not now, or at any time before a return to something close to economic normalcy.  We are certainly not back to normal yet, so rest assured that the cavalry will arrive – continuously, until the economy recovers.

How will the presidential election affect your investment portfolio?

In the short run, we expect a bout of volatility as the results of the election are slowly revealed – we expect that election-related volatility will be resolved by or around December 8th. During this period – just like any other period of uncertainty in the market – your portfolio value will fluctuate. The magnitude of any fluctuations will depend on your current positioning in relation to risk. This is always the case. At Beacon Pointe, we build portfolios that are designed to meet your long-term investment goals as indicated by your financial plan. The more your portfolio fluctuates before and after the election is directly related to your ability to generate higher long-term returns. We are advising clients – as we always do – to ignore the short-term gyrations and focus on long-term results.

As discussed above, the market is constantly discounting election probabilities – and the probability of various fiscal stimulus plans, changes in monetary policy, oil prices, geopolitics, labor market developments, and estimates of corporate profits among other various inputs. If there are surprises across any one or a number of these factors, then the market will react. If there is a complete surprise on November 4th or thereafter, in either direction, the market may move higher or lower, depending on the “certainty” that was priced in the day before. It is simply not possible to make any definitive statements about the election results, or the impact on the markets – or investment portfolios – until election day arrives, and not even then given the mail-in ballots. Ultimately, we want to reiterate, who occupies the White House is not the sole determinant of long-term rates of economic growth, and hence corporate profits. In the short-term, who occupies the White House will have an effect, but other things matter more in the long-term – like productivity growth, demographics, and monetary policy – and are not affected by who gains control in the coming months.

What tax law changes might be implemented with a Democrat sweep?

For Democrat-supported tax proposals to become law, Democrats would not only have to take the presidency and majority control of the Senate but would need to either have gained filibuster-proof 60 member control of the Senate (unlikely today) or be willing and able to limit application of the filibuster rule to push its tax legislation through.[1]

Despite these uncertainties, it is wise to be aware of candidate Biden’s key tax proposals and their effect on higher income and high net worth individuals. It may likewise be beneficial to contemplate moves to make before the end of 2020 if Biden’s tax plan and other Democrat-supported tax policies become likely to be enacted come 2021.

Biden’s campaign website provides a general overview of his key proposals. His proposals aimed at reducing tax on lower-income working families include the expansion of tax credits for dependents and childcare and the creation of additional incentives for lower-income individuals to fund retirement plans and purchase health insurance, long-term care insurance, or a first home. To partially pay for these benefits, Biden’s plan calls for federal tax increases on higher income and high net worth individuals and corporations. The proposed tax increases most likely to affect those with higher income or high net worth are as follows:

Although not specifically included in Biden’s tax proposal on his website, there is strong speculation in the media and professional outlets that should Democrats gain control, there would be a push for favored policies, including:

While Beacon Pointe will be in touch with more information as the election fog lifts, we suggest those with higher income or high net worth start thinking about the following potentially relevant 2020 moves should Democrats seem able to put tax law change into effect in 2021:

Many uncertainties remain as we head into the homestretch of the presidential election, but keep in mind that economic growth is the thing that matters most to the stock market, and no single election will decide our economic fate. Continue to invest in your long-term wealth plan and remain disciplined through pending short-term periods of volatility. Remember, do your best to remove the emotion from the markets – and the election.

We assure you that our team of advisors and investment research professionals are constantly examining all potential outcomes and scenarios to ensure Beacon Pointe client portfolios and financial plans remain healthy and viable. We thank you for your continued trust in Beacon Pointe, and if you have any questions, please do not hesitate to contact your Beacon Pointe advisory team.

[1] For additional information regarding the process of eliminating or limiting the filibuster rule see https://www.brookings.edu/policy2020/votervital/what-is-the-senate-filibuster-and-what-would-it-take-to-eliminate-it/.