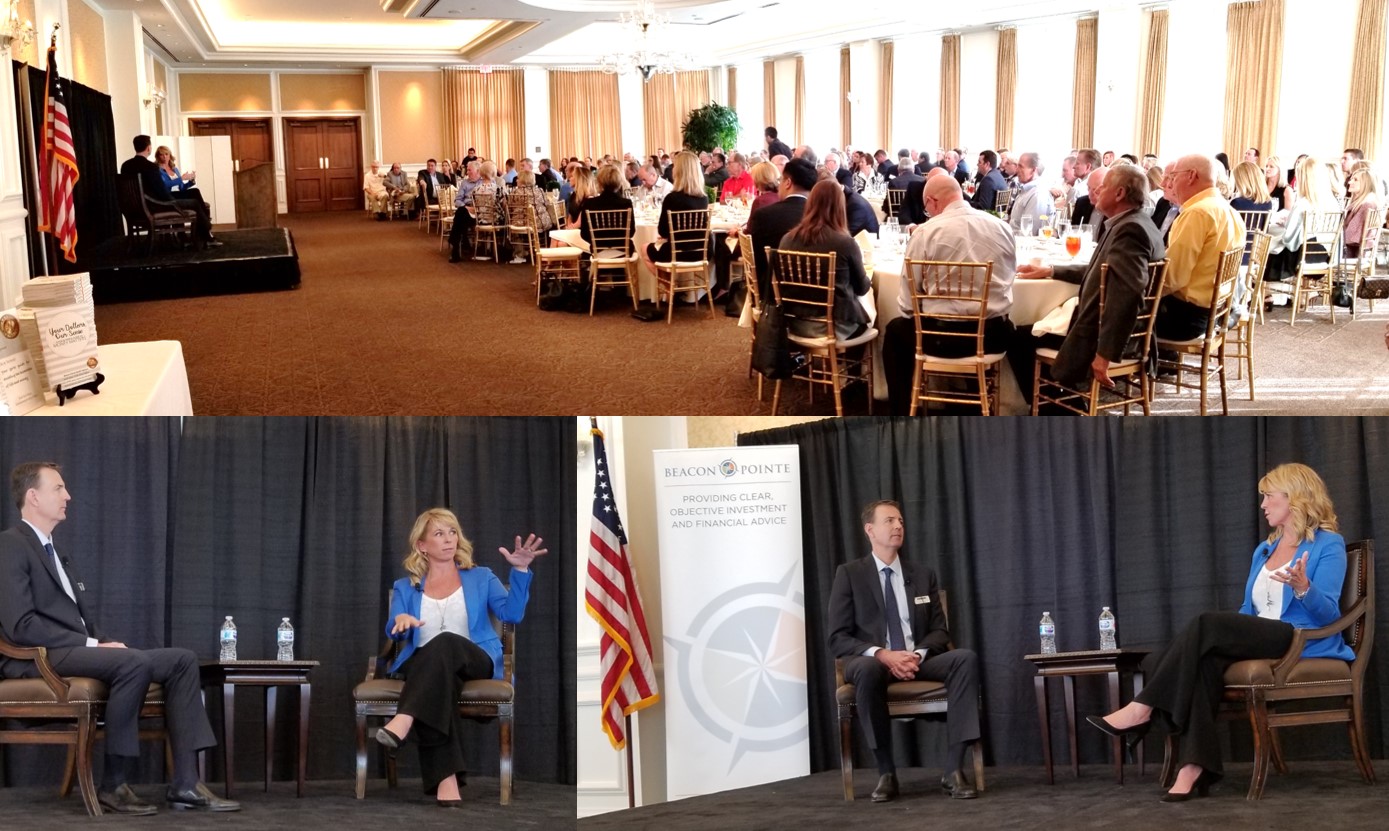 Liz Ann Sonders, Chief Investment Strategist at Charles Schwab & Co., was our guest and featured speaker at Beacon Pointe’s Seventh Annual Investment Forum.  In a lively “fireside chat” with Beacon Pointe’s own Doug Allison, CFA, Partner, she discussed a diverse and fascinating range of topics, including:

The fundamental driver of the spike in volatility seems to be the January jobs report, which showed wage inflation accelerating to 2.9%.  This fueled concerns about higher interest rates and rising inflation.  Selling pressures were exacerbated by a rather obscure derivatives strategy that bets on continued low volatility (by taking a short position on volatility).  These trades had recently become very popular, i.e. “overcrowded,” in the market.  When volatility suddenly reappeared, the short volatility positions experienced significant losses, causing volatility to spike further.  Most analysts believe this disruption is tied to technical factors and will not escalate into a large systemic crisis.  It is also worth noting that 2017 was one of the least volatile years on record.  Looking at the ten least volatile years in stock market history (as measured by maximum drawdown), Ms. Sonders noted that those years were always followed by periods of higher volatility.

2018 may turn out to be “the year of 3s,” according to Ms. Sonders.  She expects real GDP growth to be close to 3%, the 10-year Treasury yield to reach 3%, unemployment to fall to the 3%-4% range, and inflation to potentially accelerate to 3% on the heels of 3% wage growth.  She attributes this to the process of normalization after a 10-year period of secular malaise and below-potential growth that started with the Great Financial Crisis.  The economy may have finally hit an inflection point as its fundamental underpinnings are strengthening – earnings expectations for the S&P 500 Index have increased dramatically (from 11% to 19%) in just the last couple of months.

Ms. Sonders highlighted three areas that she believes offer attractive opportunities to investors.  First, the technology sector is expected to benefit meaningfully from corporate tax reform and the provision allowing companies to deduct 100% of capital expenditures immediately rather than in increments over many years.  In addition, many U.S. companies are likely to take advantage of the lower tax rate on repatriated cash and to allocate at least some of that to capital improvements, which favors the technology sector.  Also, the outlook is positive on financials as higher interest rates will improve their margins and deregulation will provide a further tailwind.  Finally, the healthcare sector is well positioned to take advantage of improved balance sheets, a wave of innovation, and growing demand from an aging population.

Schwab believes that both active and passive investing have a role to play in client portfolios.  Market conditions over the last several years posed significant challenges for active management – correlation convergence made it more difficult to benefit from a differentiated view as all assets behaved the same.  This made it difficult for active managers to outperform and led to massive flows out of active strategies and into passive strategies.  More recently, correlations have declined, dispersions in returns have widened, and fundamentals have started to matter again.  This should create a more favorable environment for active investing.

Bitcoin and Other Cryptocurrencies:

There is merit to the blockchain technology, but the rise of Bitcoin and other cryptocurrencies is largely the result of speculation and misunderstanding.  The cryptocurrencies do not have intrinsic value, are not backed by anything and therefore are not a stable store of value, and do not facilitate the exchange of goods and services.  Some countries, including China, and many companies have already banned their use.  Furthermore, the SEC is paying very close attention and will likely start regulating cryptocurrencies.  Finally, the recent introduction of Bitcoin futures allowed investors to short the cryptocurrency, which has brought some rationality to that market.

The world is awash in debt; the unwinding of the $25 trillion global balance sheet will likely cause some dislocations.  What Ms. Sonders worries about is that the U.S. has done nothing to address its debt problem.  While the annual budget deficit has shrunk, debt continues to grow as it is the accumulation of years of deficits.  The total debt (public and private) now stands at 340% of GDP; the number is much higher if unfunded entitlements are accounted for.  This debt problem cannot be solved by tax increases or budget cuts alone, but would require entitlement reform, an issue that is largely ignored by Washington.