It Pays to Stay the Course

A client reached out by email – paraphrasing a bit…

I know that selling my investments when I get nervous and trying to buy them back at just the right time (“market timing”) is a bad idea. And I know that to time the market successfully, one must get it right not once, but twice – on the way down and again before it inevitably goes back up! Which you’ve shown me is highly unlikely.

I also know that essentially nobody on planet earth has the ability to time the market consistently, and those who have tried have often been left in financial ruin…but the stock market has been bumpy lately and I’m getting a little nervous…

…so, shouldn’t we try and time the markets just this once?

Like our clients, most people likely already know that timing the stock market is a bad idea. So how do we fight against this urge to do something, anything, to make ourselves feel more in control of a market that is simply out of our ability to predict, much less control?

Below are a few suggestions and chart illustrating the benefits of staying invested.

Suggestion #1: Have faith in the future.1

Much of our propensity to panic is rooted in an underlying, perhaps even unconscious belief that this whole thing is a house of cards ready to tumble at any moment. We still want to play the game; we just don’t want to be left without a chair when the music stops. In a word, human beings are pessimistic – unfortunately for us, this is a “game” where it has paid to be an optimist.

Along the way, we experienced Vietnam and Iraq (twice), inflation and stagflation, the Dot Com Bubble and ‘08, Democrats and Republicans, the Cuban Missel Crisis, and 9/11. Need we go on?

Suppose we should ignore how much the financial media is financed by those who benefit from commissions and that panicked investors can generate a lot of commissions.

Ignore the apocalypse du jour. Instead, have faith in the future.

Warren Buffet once said, “The stock market is a device for transferring money from the impatient to the patient.” Good investors are patient, period. Keep your eye on the long term, buy and hold solid investments, and when things get bumpy, live by the adage, “Don’t just do something, stand there!” You may want to read that last line again.

If you need a guide along the way, give us a call.

The Benefits of Staying Invested 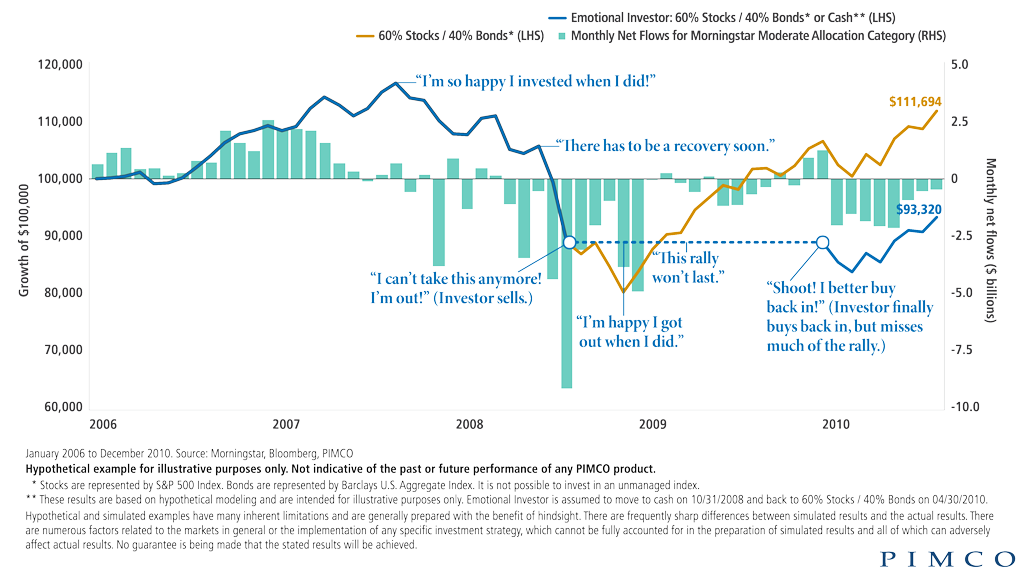