There was nowhere to hide in January, other than energy stocks. The S&P 500 and the Nasdaq Composite posted their worst months since the onset of the pandemic, as investors braced for the Federal Reserve (Fed) to raise interest rates multiple times this year. The S&P 500 at one point this month dipped into correction territory (a decline of 10% or more from recent highs) on an intraday basis, but the recent comeback has pared the loss from its all-time high to down 6%. Anxiety about impending rate hikes as well as the tapering in asset purchases by the Fed to combat inflation led to the worst monthly performance for U.S. equities since March 2020, with the S&P 500 down 5.2% in January. Smaller caps performed even worse as illustrated by the 9.6% decline in the Russell 2000.

Though it appears the two-month Omicron surge may be subsiding enough to allow for economic recovery to resume, recent data suggest momentum continues to slow in 1Q 2022. In the U.S., inflation and the nascent strength of the U.S. Dollar remain of principal concern to the economy. Corporate profits to date have been good for 4Q 2021, but the post-pandemic momentum that drove the spectacular recovery in profit growth in 2021 is starting to fade.

The January 26 Fed policy meeting may have yielded no big policy moves, but Jerome Powell’s hawkish rhetoric suggests these will come soon enough. The Fed chair has sounded increasingly hawkish since last summer. The message is that the Fed will do whatever it takes to restore its inflation-fighting credentials with less regard for what this does to asset prices. The key point Powell made in his press conference was that the Fed’s main concern is managing inflation and inflation expectations.

The only two sectors not in the red in January were energy (+18.8%), and real estate (+0.0%). Value outperformed Growth by more than 6.0% in January but over the last twelve months, the Russell 1000 Growth remains 5.8% ahead of the Russell 1000 Value with a 23.3% total return. Shares of technology firms had some of the biggest swings. The tech-heavy Nasdaq composite fell as much as 18.5% from its November 19, 2021 high and 16.3% for the month in intraday trading. International markets outperformed the U.S. in January with the MSCI EAFE (Europe, Australasia and the Far East) down 4.8% and the China-heavy MSCI EM (Emerging Markets) down 1.9%.

The yield on the benchmark U.S. 10-year Treasury saw a significant increase in January from a low of 1.51% to a high of 1.87%, closing at 1.78% at month-end. The yield on the 2-year also saw a significant spike in January, moving from a low 0.75% to close at 1.18%. The 2×10 yield spread (the difference between 10yr and 2yr Treasury yields) has flattened further following the January Fed meeting to new 52-week lows, possibly indicating a future economic slowdown.

Market volatility increased in January as hawkish Fed commentary around inflation and monetary policy sent markets lower. The CBOE Volatility Index or VIX made a new 52-week intraday high on January 24 at 38.9. The VIX has fallen back to 24.8 since that day but remains elevated in January and up 66% since the mid-October 52-week lows of 15.0.

Persistent levels of elevated inflation and a hawkish Fed in a rising rate environment helped accelerate the U.S. dollar rally. The world’s largest reserve currency reached an 18-month index high of $97.4 on January 28th before paring gains to end the month. The U.S. Dollar Index finished up 0.9% in January.

Bitcoin lost 17% in January and has corrected nearly 50% in the past three months from its all-time November high ($67,734). Bitcoin has seen 15 separate bear markets (a decline of 20% or more from recent highs) since its 2009 inception. The Biden administration is expected in February to release an executive order regulating Bitcoin and other cryptocurrencies as a matter of national security.

Investment Summary – “Inflation, Rates, and Rotation” in an Era of Financial Repression

We are going neutral risk overall (versus slightly “risk-on” last quarter) given valuations and the likely trajectory of Fed rate hikes. We define neutral risk as 70% in growth assets and 30% in stability assets in a typical 70/30 portfolio. A period of “stagflation-lite” is a growing concern on a cyclical basis and would be met with risk aversion in risk markets. We still prefer Equity and Alternatives to “safe” Fixed Income given the current – and expected – negative real yield environment. We are maintaining and adding to our positions that reflect a rotation from U.S. Large-Cap Growth to U.S. Large-Cap Value. We are removing the allocation to U.S. Small Cap due to their higher beta in a volatile capital market environment. We are reducing the allocation to EAFE Growth to better reflect the underlying benchmark. We added to Core Fixed Income to reduce overall portfolio risk and increased the exposure to short-term bonds to protect portfolios from rising interest rates. We removed the inflation protection position in U.S. TIPs – this trade has done extraordinarily well as inflation expectations rose steadily since we put the trade on in 3Q 2021.

Interest rates have risen from the multi-century lows reached in August 2020 when the U.S. Treasury 10-year yield bottomed at 0.51% but remain at historically low, repressed levels. The dislocated labor market and COVID-related supply chain disruptions have produced inflationary pressures that are forcing the Fed’s hand. A tighter monetary policy has been priced in by the market; both nominal and real rates have risen in anticipation. We expect that interest rates will remain at very low levels historically. In conjunction with higher realized inflation, the result is negative real yields – the hallmark of a concerted government effort to pursue policies of financial repression. 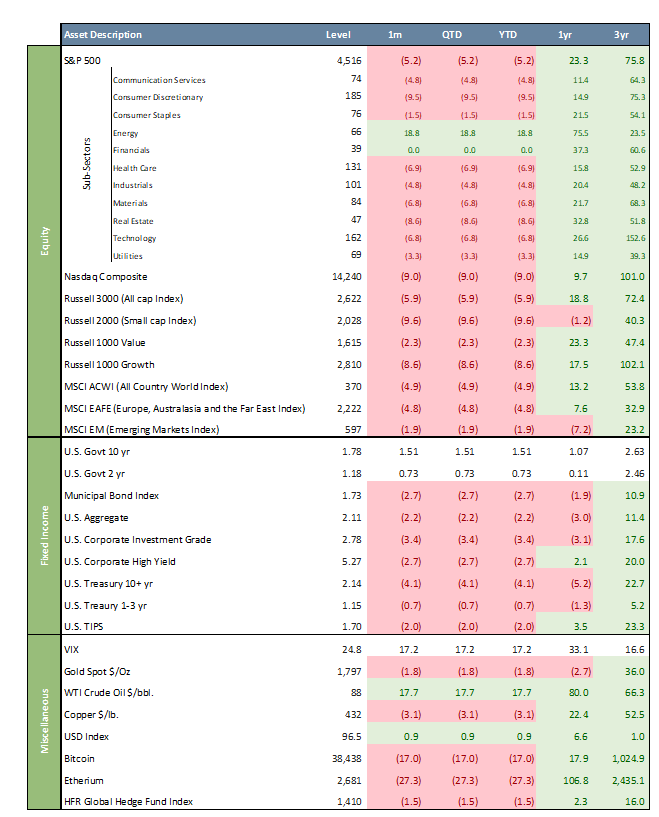 Important Disclosure: This report is for informational purposes only. Opinions expressed herein are subject to change without notice. Beacon Pointe has exercised all reasonable professional care in preparing this information. The information has been obtained from sources we believe to be reliable; however, Beacon Pointe has not independently verified, or attested to, the accuracy or authenticity of the information. Nothing contained herein should be construed or relied upon as investment, legal or tax advice. All investments involve risks, including the loss of principal. Investors should consult with their financial professional before making any investment decisions. Past performance is not a guarantee of future results.