Public Policy, Upcoming Elections, and a Macro Outlook for 2016

For those that were able, we thank you for joining us! Highlights and key takeaways from Beacon Pointe’s Annual Investment Forum: Public Policy, Upcoming Elections, and a Macro Outlook for 2016 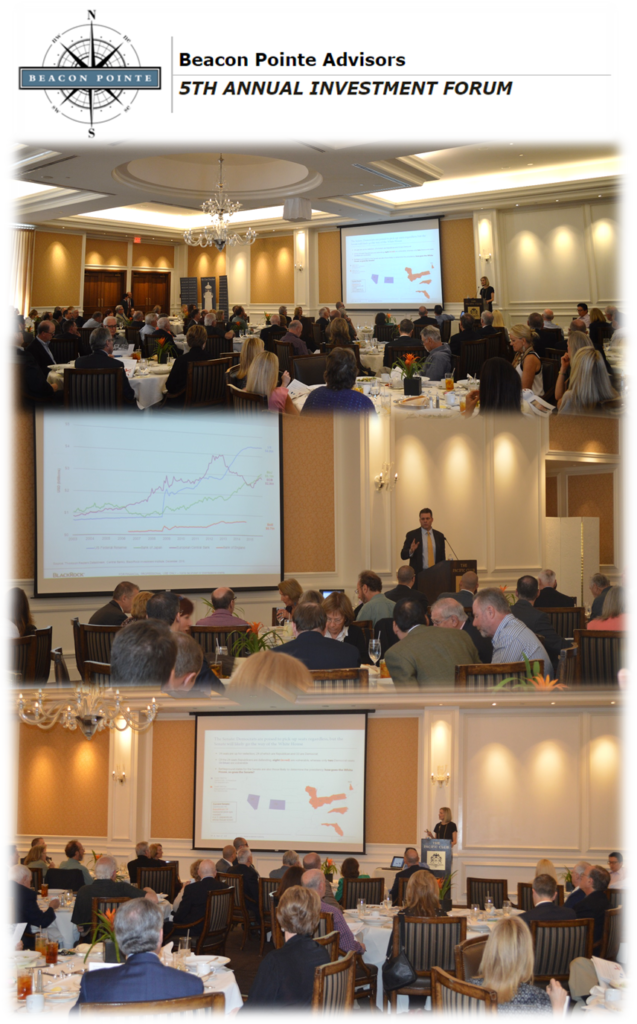 Mr. Trudel also touched on the fundamental reasons for investing in emerging markets, namely their size relative to the developed world in categories such as population, mobile phone subscriptions, military personnel, and natural resources.  All of this is coupled with their lower debt, lower valuations, better demographics, and faster economic growth.  This is a compelling long-term investment theme, but high volatility and short-term structural issues have led Beacon Pointe to recommend relatively small allocations to our clients; this view is shared by the BlackRock Global Allocation Team as they are currently underweighting emerging market exposure.

Additionally, due to the low (and in some cases negative) interest rate environment, most bond investments are not priced for attractive long-term returns.  While Beacon Pointe shares the view that muted returns should be expected in the bond market, we continue to invest in fixed income for its diversification and risk reducing benefits.

Libby Cantrill, CFA, Executive Vice President at PIMCO, presented her timely Washington Policy update with the beginning of primary season for the 2016 election at hand.  Ms. Cantrill shared positive news that things appear to be improving from a congressional manner; the number of bills being reported and the number of Senate amendments that are being considered have increased for the first time since 2009.  She takes this as a sign that the Ryan-led House and the McConnell-led Senate are working across party lines more effectively than previous Congresses.

Ms. Cantrill also shared that the federal government’s spending is projected to be a positive contribution to 2016 Fiscal Year GDP for the first time since 2013.  While she did not debate the pros and cons of high federal spending, she believes that in the short run federal spending is a positive to the economy.

She also shared her analysis of the 2016 election for both the legislature and the greater headline-generating presidential race. Libby is upfront about the fact that while election talk is wonderful fodder for cocktail party conversations, it has historically had a relatively small impact on things like the economy, stock market, and fed policy.

A few takeaways from Libby’s election evaluations include that short of an indictment, Hillary Clinton is likely to be the Democratic nominee due to her commitments from super delegates and her super PAC with a war chest of $45 million.  And though he is the current front runner, Donald Trump is not likely to win the Republican nomination due to his lack of support from the party establishment and his extreme views that may alienate national voters, but we shall see!