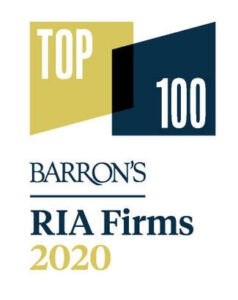 For the third year in a row, Beacon Pointe has been named to Barron’s Top 100 RIA Firms. Each year, the award has grown to include more and more firms on the list, going from recognizing only 20 firms in 2016 to 100 now in 2020 with over 13,000+ Registered Investment Advisor (RIA) firms across the country to select from. The Barron’s Top 100 RIA Firms award ranking is dedicated to recognizing elite firms across the country that demonstrate steady growth, both organically and through mergers and acquisitions of smaller RIA firms. This year the ranking was expanded to include several new metrics including technology spending, staff diversity and succession planning.

Many of the firms selected by Barron’s currently have 15+ office locations, with an average of 75+ advisors and 29,000+ advisory clients. Beacon Pointe’s diversity in leadership (in addition to the firm’s CEO, more than 50% of the firm’s leadership team is comprised of women as well as almost half of its employee workforce is female), continual acquisitions and nationwide office expansion, steady client growth and openness to new technology with an unwavering aspiration to constantly elevate the service experience for clients will continue to play an important role in Beacon Pointe’s future.

In addition to being ranked among the Top 100 RIA firms in the nation, Beacon Pointe CEO, Shannon Eusey, was also included in Barron’s Executive Class listing this year. The Top 100 RIA Firm executives who graduated into their management roles after starting out as ranked advisors are exclusively included in this list. Shannon is the only woman currently on the list, having spent four years as an advisor before founding Beacon Pointe in 2002.

To view the executive class ranking and read about the changes the RIA industry has seen in the past year, click here.

Participation in Barron’s Top 100 RIA Firms ranking is by invitation only, and limited to firms that meet the minimum eligibility requirements. As with all Barron’s rankings, the proprietary evaluation formula is not disclosed. Some general guidance on evaluation methodology: Participating firms were evaluated and ranked on a wide range of quantitative and qualitative data, including: assets overseen by the firm, revenue generated by the firm, level of technology spending, number of clients, size of staff, diversity across staff, and placement of a succession plan. The ranking is not indicative of the firm’s past or future performance. Neither the firm nor its executives pay a fee to Barron’s in exchange for the ranking. Barron’s is a registered trademark of Dow Jones & Company, L.P.